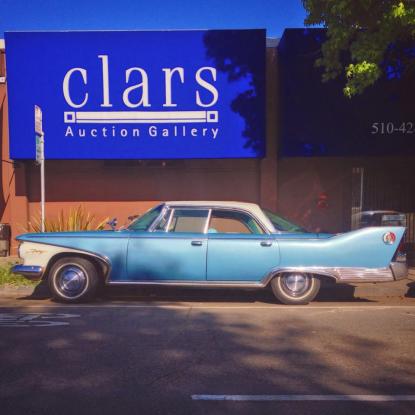 Sometimes you get so far ahead of the curve that you’re blind to your own turns. This is precisely the predicament that Highland Park found themselves in with their Forward Look cars at the turn of the decade.

Plymouth in particular had screamed from every stage that Suddenly, It’s 1960! in the fall of 1956. So what were they to do when it actually made it to 1960? Apparently the solution was to offer a brand new Uni-Body shell and soon to be legendary 6 cylinder powerplant in an updated wrapper of what warped the automotive Space-Time continuum 3 seasons earlier.

Bedazzled and befinned, we have the 1960 Plymouth looking to the recent past as it plugged from the Space Age to the Camelot years.

One shouldn’t single out the 1960 Plymouth, nor all Mopar offerings as particularly dubious in details for that model year. As tends to be in transition periods between decades, some trends that define the zeitgeist of one era linger into another. Both competitors from Ford and Chevrolet boasted some ridiculous rump plumage as well at the dawn of the decade. Seemingly no manufacturer had a clue how the shed tail fin feathers in the sudden moment that was 1960.

The missed opportunity here was that all 1960 Mopar cars save Imperials wore brand new Unit-Construction body shells. Being the first of the Big 3 to take this body construction full force to the broad majority of the vehicles it produced was a revolutionary change. One has to wonder why Chrysler decided to do it in re-tailored outfits of the same old clothes, considering they were still on the brink from the disaster the 2nd Forward Look cars of 1957-59 proved to be.

It was more than a shame. The Forward Look cars had brought a new verve of roadability to American cars rarely seen before, and the 1960 Uni-Body Mopars kept up that tradition. Plymouth went from having the most archaic base Inline Six in the industry to the most modern overnight with the all new Slant Six in 225 cubic inch capacity. The basic goodness of that poweplant outlived many a styling fancy.

Stout as that Six was, there were ever increasingly powerful V8s available in these Plymouths as well. Coupled more often than not than the well regarded Torqueflite Automatic transmission, a well optioned Plymouth Fury could feel like an earthbound rocket to match its Sputnik influenced looks. Even in milder states of tune, like this 318 Cube equipped Four Door Hardtop, the Fury could hold its own against the Mighty Mouse 283 optioned Impalas and 292 saddled Ford Galaxies of the world.

The actual results at the end of model year 1960 are resolutely painful. If you remove the Valiant from production totals (as it should be, it didn’t become a Plymouth until 1961), the full sized Plymouths ranked 10th in the Auto Industry, behind a floundering Buick and slightly ahead of Prestige and Exclusivity giant Cadillac.

The factors were myriad, none helped by the fact that not all the quality bugs were sussed out with the completely new Uni-body. It didn’t help that Dodge offered its more glittery Dart on the same chassis for a marginally more expensive asking price. Plymouth tried a facelift for 1961 by shaving off the tailfins and furrowing the angry brows of the front end further. All that accomplished was even more darkness for Plymouth. Once the former quality and innovation king of the Low-Priced 3; they cowered in the shadows of rambunctious Impalas and ever increasingly elegant Galaxies.

Fifty Five years after their relative failure, it makes any 1960 Plymouth an incredibly rare sight. The rarity is highlighted when an example is one of the higher trim models, a portion of the automotive market Plymouth never thrived in the same way Ford and Chevrolet did.

In a weird way, though, living to be an unique example to tell the tale is an added bonus. Trials and difficulties make for stronger characters, and it would be a delight to hear the tales of a 1960 Plymouth Fury.

Happy Holidays from a W123 I had 10 years ago from Christmastime in a Cemetery.
With toys like this….
Happy Messy Colonial Sagittarian Feast Day from your local Corvair on the internet.
Autumn Leaves of the less hysterical variety.
💡The annual “My Corvair loves to eat tail lamp bulbs” post💡
It might be a touch foggy this morning
No Halloween Costume. Just wishing I remembered more about how to do auto bodywork from my childhood.
Guess who’s 57 today? This Van Nuys Born Scorpio with heaps of personality! Happy Birthday Frankie you’re one of a kind yet one of 235,000.
When you finally put that cove trim piece on that @vondeitch gave you over a year ago 🙄.
11 years ago a quite evil Catalina Prowled below 6th Street.
Nursing an injured bird.
Remember when the Bay Area was cool and it was more common to see an old Cadillac doing its business of being extra instead of a buncha Teslas running about with shitty panel gaps?
Old-Black-Men-That-Drive-Earth-Toned-Full-Sized-GM-Products-And-Only-Buy-Cookies-From-Walmart-Dot-Tumblr-Dot-Com.
Dodge on the Lo.
Which neglected 60’s Buick Convertible are you?
Happy Corvair Day.
Rivals.
This neighborhood needs more Corvairs there’s too many damn Mustangs.
Mustang garden gnome.
Finally, a Mustang I find desirable.
Loading Comments...
%d bloggers like this: