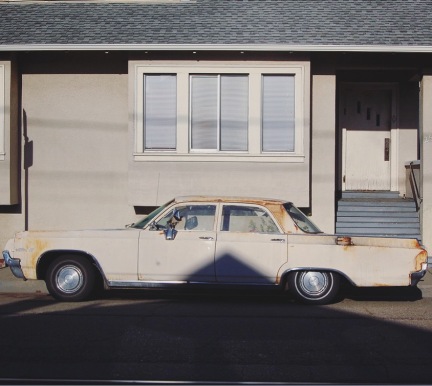 Caste systems find their function in strict boundaries. If there wasn’t exclusive traits to one station in life, the combination of fear and desire wouldn’t keep products in their proper places. As something that humans have created for each other, we oft find these systems in play in the products humans create as well.

This of course means that there’s rebellions and compromises throughout caste systems to gain more for the privileged. What does this have to do with an ordinary Oldsmobile sedan from 1964 you may ask. Plenty, when you’re one step up in the prestige sweepstakes, yet see a family rival walking away with spoils of riches.

Enter the Jetstar 88. For the better part of 12 years, Oldsmobiles came in 3 varieties of flavors. The price-leader 76 series became the base Rocket 88 in the early 50’s. Sensing a need for a middle meat, Olds ponied up the Super 88, blessed with the more powerful version of the Ninety Eight Rocket V8 in the shorter, lighter 88 package. This format of 1-2-3 Rocket lift off stayed the only 3 ways you could launch an Oldsmobile through 1960.

By 1961, Oldsmobile offered 3 levels of compact rocket in the form of the F-85, F-85 Deluxe and Cutlass. In the weird in-between, the specialty personal convertible, the Starfire, based on the Super 88 Convertible, became the range topper with full leather upholstery, a bevy of power options and the largest booster version of the 394 Rocket V8.

This spread was prompted by a diversifying automarket first and foremost. It was heavily influenced by the steady rise of Pontiac in the early 60’s as well.The most basic Pontiac Catalina sat barely above a V8 powered Chevrolet Impala but offered so much more; a massively torquey 389 V8 and access to at least a 3 speed automatic transmission. Worth of note, the Catalina’s range overlapped in price points with Olds’s new compacts. The well-trimmed luxury of a Pontiac Bonneville sat in the heart of Oldsmobile’s Full sized line up. 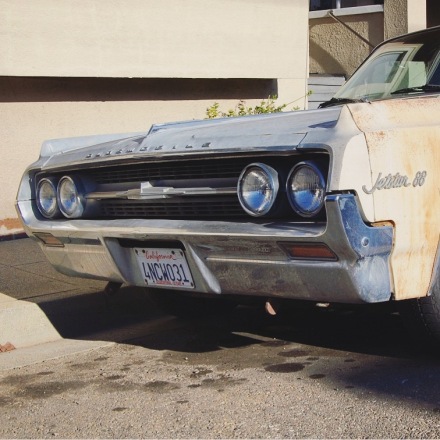 As Pontiac rose to #3 in auto sales in 1962, Oldsmobile executives must have become a little bit jealous of the potency and profits the full spectrum of Pontiacs generated, despite Oldsmobile’s more prestigious pedigree, market position and not exactly suffering sales or reputation.

The classic way that Oldsmobile sought to usurp that position was to use the snob appeal on a discount dress. Chrysler had done this extremely well while killing off their DeSoto brand with the 1961 Newport. People couldn’t resist a whole lot of Chrysler for under $3,000 list. Oldsmobile used the same philosophy for the Jetstar 88, which in this Celebrity Sedan form started at $2,924. How was it done though? Wasn’t the still present Dynamic 88 enough of a price leader? Not quite. While the next step up Dynamic 88 kept it’s 394 V8 in 280 horse guise, The Jetstar 88 took all of the driveline bits from the newly upsized F-85/Cutlass line. In place of the old generation rocket was the second generation short deck Rocket V8 in 330 cube guise with 230 horsepower standard. Where the Dynamic 88 offered the Rube Goldberg Roto-Hydramatic with 3 speeds, the Jetstar 88 used the Jetaway 2 Speed Automatic. The Jetstar 88 even used Cutlass sized drum brakes for the maximum of profit generating parts sharing. In some ways the Jetstar performed adequately as a base Olds (some test figures account for a 0-60 time of under 10 seconds) and some areas it was woefully underbaked (notably the smaller drum brakes already middling on the F-85 were overtaxed by a couple of hundred more pounds of B-Body bulk). 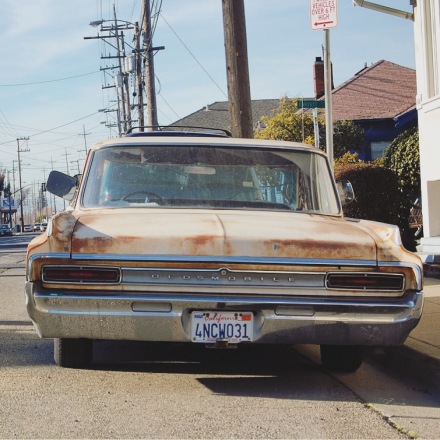 With now 6 different Full sized nameplates (we’re forgetting the decontented Starfire based Jetstar I) the Jetstar 88 got lost in the shuffle while squeezing the Super 88 out of existence for 1965, before being eating the Dynamic 88 alive while rebranding itself as the Delmont 88 in 1967.

While Buick more successfully rebranded their LeSabre in this role for the bulk of the 1960’s, Oldsmobile gave up on this price leader half pint concept by 1969 when all 88’s became Delta Grade, got Hydra-Matics and at least a 350 V8. It proved an eventually failed experiment in Oldsmobile trying to negate its class station of right in the middle of America’s hearts as a brand declaring subtly that you arrived, not that you were still striving like Pontiac. About 2 ½ times more Olds shoppers went directly for the full on authentic Dynamic Eighty Eight experience as under 25,000 folks chose the Jetstar Celebrity Sedan versus 57,000 Dynamic Celebrity Sedans. Sometimes it doesn’t pay to play greedy.