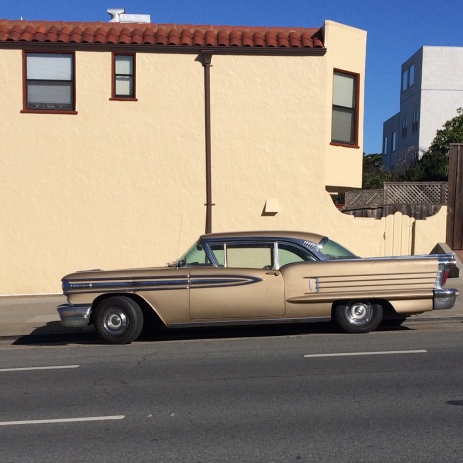 Beauty is in the eye of the beholder. Or in the eye of the buyer, I guess. In the twilight zone of the late 50’s, many an automobile brings up the question of what exactly did “good taste” mean in terms of what American car shoppers wanted.

This is where the 1958 Oldsmobile enters into our consciousness. When all is said and done, can you believe that it was one of the most popular faces for ’58? Perhaps entranced by all the sparkling jewelry, we spend time with this glittery gem, figuring out if it was a ghoul or the genteel beast most middle class buyers wanted that year.

Oldsmobile had built a pretty solid reputation for supplying solid, middle class transportation to the masses that had made it to a stable station in life. For those engineers, managers and mothers that found themselves able to afford a mortgage in the suburbs, there was few other peers that established you as prominently as an Olds.

Never playing a minor league role, Oldses had a reputation for offering top notch engineering such as the Hydra-matic transmission and rocket V8 with more often than not sterling quality control that rivaled luxury cars. It also built that reputation for respect with the assistance of rather conservative styling. Where there were plenty of peacocks and flamingos trotting out into the heart of the medium priced market, notably Chrysler’s 1-2 punch of Forward Look New Yorkers, Firedomes and Coronets, Olds played it securely safe through 1957. 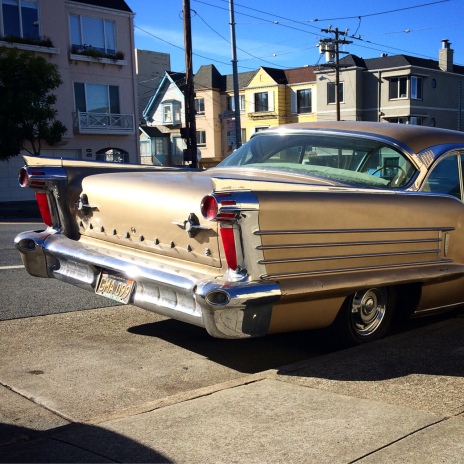 In the twilight of Harley Earl’s reign as the head of GM’s head of design, his preference for chrome trim and more rotund forms had one last big outing throughout all GM cars, including the Corvette, as they spooled out of factories in the fall of ’57.

Of course, this chrome-conservative look had been locked in before GM stylists got a look at the clean, crisp and wildly befinned 1957 Chrysler products. For Chevrolet and Pontiac, this form became a one year body. At Olds, Buick and Cadillac, the 2 year body got quad headlamps and oodles and noodles of trim to rival every aluminum Christmas Tree in tract home living rooms.

It’s hard to say who wore the look less flatteringly. The sparkle benefitted Cadillac’s tradition of being “the most” the most. It convinced many a Chevrolet buyer play with costume jewelry, which returned the brand to #1 in sales. Where the junior Buicks where festooned with rocket shields on their rear quarters, Oldsmobile saw it fit to add 4 thin chrome strips to their quarters.

These ended in huge Chrome totem poles to Oldsmobile’s now traditional rocket afterburner tail lamps. But wait, there was more, in the form of two earrings on the trunk glittering over the O-L-D-S-M-O-B-I-L-E call out. Surely, anyone following a ’58 Olds would never ever forget what it was. 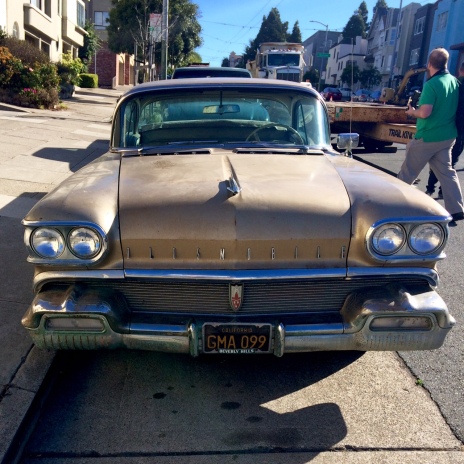 Oldsmobile’s face, however, took on the most brutal interpretation of a newly established corporate blunt visage. Huge swaths of what more or less could be considered mascara lined the headlamps, moreso on upper trim level Super 88 and Ninety Eights.

They sat around a smile turned upside down grille, and a mean moustache of a bumper to give the visual of a surly waiter in an crusty French Restaurant. Bordering on fetish role play, the 1958 Oldsmobile is something that toyed with your deepest expectations of who and what you’re attracted to, and where the fine line between looks being enough versus the action and skills to satisfy your needs.

Ford designer Alex Tremulis satirized Oldsmobile’s four horizontal rear-fender chrome strips by drawing in a clef and a few musical notes on a photograph. Under all this visual bulk however, were some of the finest cars on offer for 1958 families.

The 371 Rocket V8 returned for its second season, offering up 265, 305 and 312 horsepower with 2 bbl, 4bbl and the 3x2bbl J-2 option. With the flexible 4 Speed Hydra-Matic, a pretty decent mix of economy and performance was available in Oldsmobile showrooms. Where Edsel’s Citation, with its massive 410 V8 and 345 horses needed 9.7 seconds to hit 60, a 305 horse Super 88 was able to click off that run in 8.5 seconds. While not as blindingly fast as a competing DeSoto Fireflite, it didn’t have the quality woes of the Forward Look cars that sent them into a sales tailspin their second year on the market.

In as season where even sister division Buick had a hard time stitching their offerings together in a competent way, the Oldsmobile line offered a well-muscled safe space to establish their travel needs.

On that note, the incredible Hulk Olds was the 4th popular brand in sales for 1958, ahead of everyone save the traditional low priced three. As Oldsmobile produced nearly 295,000 cars in that recession addled year our Super 88 example was one of 18,653 that left the factory in ’58. In tumultuous times, we grasp to the things we know that are consistent and true. A beautiful brute offering security is definitely something the 1958 Oldsmobile should be remembered for 60 years after it opened its doors to an ever more anxious buying population.

Someone’s ready for hunting season.
Fall, By Impala.
It’s gotta be the town’s most expensive root beer float.
The first time I saw this ‘68 Corvair was 10 years ago. The work that’s gone into keeping it on the road is marvelous and inspiring. Keep your fingers crossed that I have a bit more money coming in so I can do the same before we run out of (or it becomes prohibitive to consume) dinosaur juice and you know get those long put off Frankie plans up and running.
This is literally the only time I’ve found an El Camino sexy.
SUPER COUPE.
I’m surprised how these are getting more rare to see 35 years on.
Lord be a ‘65 Tempest Coupe.
Some butts you’ll always stare at.
@vanascabana: I’d like to think the truck’s name is Beau.
Hey lil Honda.
I can’t believe y’all didn’t tell me about the eBussy.
Yes we truly love a hunk around these parts.
Today in take your Corvair to the nursery.
I dunno about y’all but this new DeLorean is giving me a boner.
Yea I get that premium is $7 locally. I get that fascism is on the rise. And it’s a Super 88 so it needs premium for those 330hp. But y’all know of some editing work so I can buy me a big Olds? Before the world ends?
Me: It’s a pretty car.
Ready for the Rally or Radwood.
Leave it to @vondeitch to understand the ASSignment for my birthday.
All I’m saying is my 40th birthday is tomorrow and I’m accepting all mid life crisis sun machines.
Loading Comments...
%d bloggers like this: