The Ford Falcon walked away with the sales crown in the compact car race in 1960. Proving to be a splendid combination of thrift and simplicity, the Falcon set all rivals scrambling for a more simplified piece of the pie.

Where was the Falcon to go for its sophomore year? A little more glitz, a little more muscle of course. It was a Motor City Machine after all. Once the basic needs of American consumers are met, they always want more. It was a lesson Ford learned early on, and quite painfully with the Model T, and there was no time to waste when it came to keeping the Falcon up with the times.

Notably, the biggest growth spurt and additional luxury happened under the hood. The freshman Falcon’s 144 cube Inline Six was known for excellent gas mileage, but performance was on the more marginal side of the field of competitors. It’s 90 horsepower struggled to compete against the Corvair’s 95 hp option, nevermind the base 101 horsepower available in the Plymouth Valiant’s Slant Six. With 0-60 times in the 20 second range with the Ford-O-Matic, the original Falcon wasn’t the swiftest at taking flight.

A little bore and stroke job brought a 170 cube version of the same six with a more comparable 101 horsepower. Not necessarily a match for the 145 horsepower available in the Valiant, but definitely competitive with the 98 horsepower available in Corvairs. Manual Shifted versions of the new optional engine cut 0-60 times to the mid teens, keeping the Falcon more swift and attuned to modern traffic. 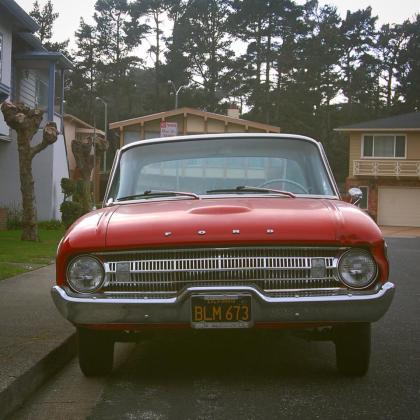 Other updates were cosmetic and allowed Ford to add to a more profitable bottom line. In response to the zesty Corvair Monza, Falcon fielded the rival bucket seat and console holding Futura as the top trim level.

Other updates included a new convex grille that appeared richer and more complex than the inaugural face Ford fancied for the Falcon. Otherwise, minor trim updates throughout sufficed, with a few new paint options. Ford was long from the days of “whatever color you want, long as it’s black.” Though straightfoward basic transportation (The Falcon did not offer Power Steering or Brakes in 1961), the Falcon presented itself as a cheerful companion, and not necessarily outrightly cheap compared to some rivals. 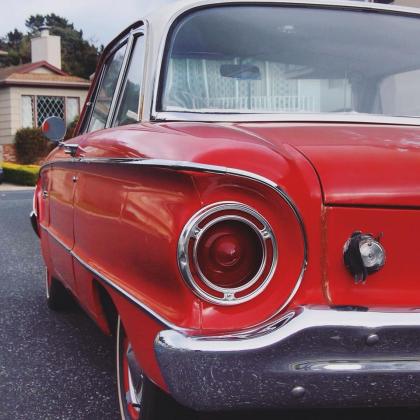 The lack of tampering with success and just adding more gravy to the mashed potatoes proved even more fruitful for Ford. The Falcon improved on its record breaking first year on the market. 474,000 of the Sedans and wagons found buyers that year.

It would be the peak before the Falcon would start to face internal competition from the middle bed Mid-Sized Fairlane in 1962, and would lose its sporting pretenses to the Adam’s rib Mustang in the later half of the 1964 model year. From humble beginnings to being the base of 2/3rds of Ford’s output for the rest of the decade, the Falcon is an unlikely hero in American Automotive history. Luckily, we’re consistently blessed with their beguiling yet basic nature 56 years later. May Falcons forever take flight on streets near and far.