It might be amazing to most minds that this flaming red finned flamingo of late 50’s meets the turn-of-the-decade imagination was considered more conservative than what came before. With some flattening of curves and angles, the Space, Spirit and Splendor of the 1960 full sized Chervolets prepped them for a decade of more mature motoring and discretionary buyer tastes.

The rationality mixed with moxie would propel the Impala towards becoming one of the keystone cars of the 1960’s. Like the missile trim on the sides, there was nowhere to go but forward for the priciest non-sports Chevrolet.

General Motors designers realized they might have gone a bridge too far with the 1959 models. Only Oldsmobile could claim in any way that their offerings for ’59 were less flamboyant than what came before. For Chevrolet it proved to be a battle against longtime arch-rival Ford.

The 1957 Ford had upset the apple cart by being fancier and fatter for more people at the bottom of the market. The upright, still sensible yet stylish Chevrolet Bel-Air found itself still chafing at the Sloan Hierarchy that Ford didn’t have to consider. Chevrolet had Pontiac to bounce up against, offering more luxury and prestige for not too many more pennies. By 1959 though, the battle was on.

However, the 1959 Chevrolet proved a twee bit too much for car shoppers, as the ornate yet conservative 1959 Ford claimed sales victory and design praise. So a simpler face and reduced rump where called in for the Big Chevrolets for 1960. Gone were the expressive eyebrow “nostrils” over the headlamps. A simpler horizontal grille treatment greeted buyers as well.

Behind the grille saw similar powertrain options as previous years. No less than 7 varieties of 283 and 348 V8s accompanied the long serving Blue Flame 235 cube six, backed by either the old stand by Powerglide, the Turboglide in its last season or manual shift selections. Performance could vary from absolutely drowsy to caffeinated lively, with as much as 335 horsepower on hand. The performance battle was well underway, and the firepower available lent itself to the creation of the Super Sport package the next year. 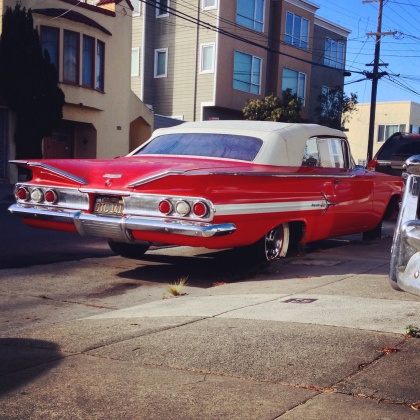 The most sizable change happened in the rear. Out were the Bat Wings and Cat’s Eyes tail lamps of the ’59 models. In was the more angular Gull wings and the return of 3 tail-lamps for Impala models. New for 1960 was the consistent hierarchy established by that Chevrolet world order.

Biscaynes and Bel-Airs would find themselves with lesser lenses compared to the Impala through the majority of the remainder of their existence. In addition, throughout the early 60’s, The Impala rump got extra trim and beauty panels to set itself apart from the cheaper sister ships. Although it was less flamboyant in design language, the way the Impala enticed you from behind became more intricate and delicate than before.

The end result was just 10,000 shy of half a million Impalas alone sold through Chevrolet dealerships in 1960. Of those, just over 79,000 Impala Convertibles found buyers, far outselling rival convertibles from Ford and Plymouth combined.

Though mildly toned down, the Impala offered in a very tailored way what a number of car buyers wanted in their 1960 automobile. It set the example for maximum personalization and optimization that would become commonplace for American Cars during the 1960s. Out of 1950’s flamboyance came the most nuanced of choices.