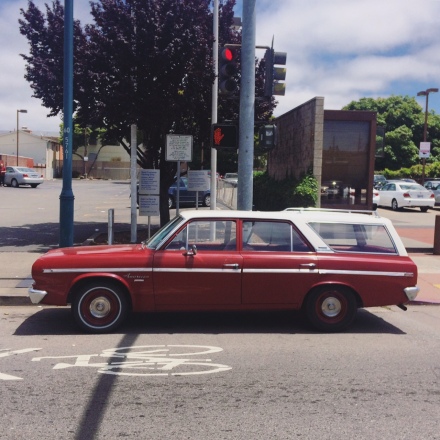 Always walking to the beat of a different drum, the heritage of AMC stretched back into two independents that had long done it their way. It’s by no chance that the first, least expensive option on offer in their showrooms nationwide relied on the manifest-destiny ringing “American” nameplate.

Back in the days of AMC being rooted in Nash, the Rambler concept was by far the most continually successful compact car concept, making sure to offer those a lot of comfort in their decreased footprint. Closing in on 20 years after the beginning of that risk, what did the littlest AMC product give you in 1968? 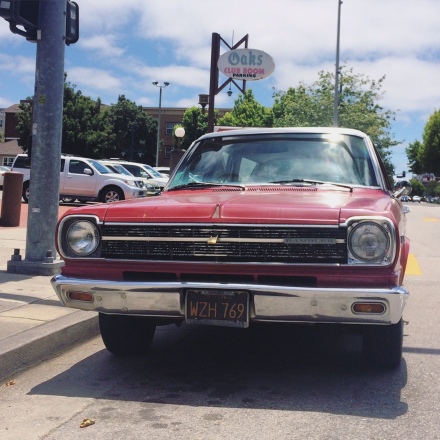 It gave you an evolution of the same car that had been on offer since the Winter of 1963, basically. In turn, that meant the basic chassis dated from the Fall of ’62. The American was merely a narrow’d and shortened Motor Trend Car Of The Year Rambler Classic/Ambassador to replace the restyled 1961 American that had roots in the original 1950 Nash Rambler.

For 1964, Dick Teague was able to give the American a rather fresh, stylish and sleek look that was far less clumsy than the competing Nova, less bulbous than the Valiant and far less reliant on visual jewelry compared to the re-designed Ford Falcon.

In fact, even for its 5th season on the market, it still cast a dashing, and really compact, figure, as the Falcon had migrated into being a shorter Fairlane, and the Nova grew to nearly Mid-Sized proportions of the original 1964 Chevelle without the same amount of usable space.

Besides the Falcon, the American was the only compact to bother to offer a Wagon option by 1968. It also still offered a fancy Hardtop coupe as well, another bodystyle lost to the march back up-market during the mid 60’s away from Compact cars. AMC didn’t force you to move up to the fancy new Javelin as the smallest, sportiest offering in their showrooms.

The wagon offered 66 cubic feet of cargo space on its tidy 106 inch wheelbase, a full 7 inches shorter than the only other compact domestic wagon on offer, the Ford Falcon. For a particular sweet spot right above import competition before having to graduate to a variety of bulkier intermediate wagons, the Rambler 440 wagon offered a slate of reasonably economical 6 cylinder engines in 199 and 232 cubic inch guises alongside the optional Typhoon V8 in 290 cubic inch guise. 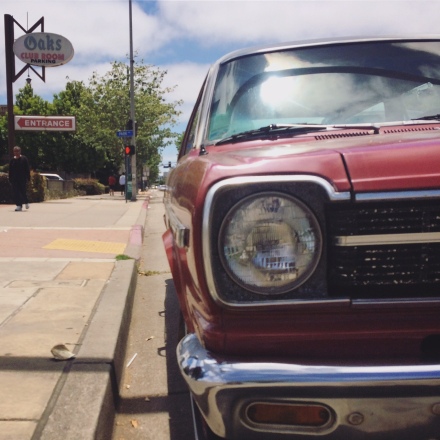 The majority of the wagons stuck with the economy car roots of the American, and stuck with one or the other of the AMC Six cylinders that offered more than their fair share of “American Style” low end torque for tooling around town with ease and keeping up effortlessly with 70 mph cruising on long distance interstate highway jaunts.

Noticing that they occupied a particularly sweet spot in the market, AMC was loathe to abandon this particular zone in the market. When the American was replaced in 1970 by the AMC Hornet, a “Sportabout” hatchback wagon was included in the line. The basic bodyshell would remain with AMC through the buyout with Chrysler, resulting in America’s first home grown crossover-utility, the AMC Eagle.

Back in 1968, 10,414 buyers plopped down at least $2,426 and started to add options to America’s smallest station wagon. Perfect for those that don’t need too much metal as their family hauler went to their local AMC dealerships to get perhaps one of the most underrated machines of the 1960s. Given their survival rates 50 years into the future, it seems they made a wise investment.

Date yourself by playing a video game.
I swear my hometown is the capitol of unfinished Buick Convertible projects.
“Sitting, in the park, waiting for youuuu-ooh-ooh-ooh”
Happy first “Pleasant Valley Sunday” of the New Year. Now back to yardwork and laundry 🧺
Lord. Fascism in every strip mall parking lot.
2 years ago, on a similarly dreary early Capricorn Season day, I purchased a 1965 Corvair Monza Sports Sedan in Artesian Turquoise over white vinyl. Being the 4th Owner, I christened it Frankie a few days later. As we pass the 2 year mark, Frankie the Corvair is joining my top 5 favorite cars (out of 13!) that I’ve owned. Somewhere above Florence 88’s and probably tied with Caledonia the 260E (oddly for similar twisty road driving pleasure).
“Bring me that gold, I’ll do my own shopping!” - Florence Ballard
When’s the last time *you’ve* seen a Chevy Beretta?
How much money do you wanna bet this is the first time the wipers on a 15 year old Buick Lucerne have been replaced?
You might of heard of “Elf on the Shelf”
Porn for our German Kinksters
On this episode of “Punked”
Mustang Come - Mustang Go.
Happy Holidays from a W123 I had 10 years ago from Christmastime in a Cemetery.
With toys like this….
Happy Messy Colonial Sagittarian Feast Day from your local Corvair on the internet.
Autumn Leaves of the less hysterical variety.
💡The annual “My Corvair loves to eat tail lamp bulbs” post💡
It might be a touch foggy this morning
No Halloween Costume. Just wishing I remembered more about how to do auto bodywork from my childhood.
Loading Comments...
%d bloggers like this: