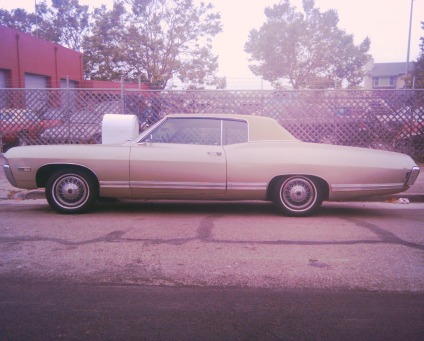 The increased emphasis of accessible luxury made the Caprice the new King of the Chevrolet castle in a short number of buyer seasons. Although the Impala still held the sway over many new car buyers as the default choice for motoring finery, more and more people elevated their purchases to the most princely of Chevies as the 1960’s wound down.

American audiences love a little snob appeal. The American-as-Apple-Pie and Baseball Impala seemed too optimistic a choice, too unaware to cynical self preservation and exclusivity. Hoping to catch buyers before they elevated themselves further up the Sloan ladder, or into different products within Chevrolet’s showroom, the Caprice vowed to be the luxury car for the every-person. 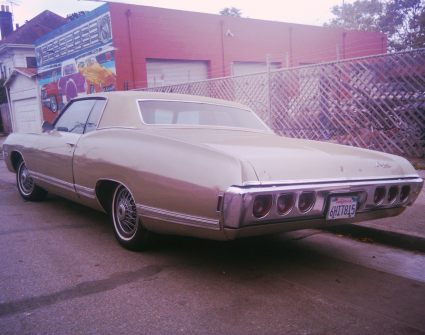 There were many a foe that necessitated the invention of the Caprice in the first place. Pontiac started to eek its Bonneville into bargain basement Electra 225 territory with their ’64 Brougham. Ford followed with the Quieter Than A Rolls-Royce LTD the next year. Even smaller competition came along as Oldsmobile retaliated with its “Little Limousine” with a pop culture name tie in with their new Cutlass Supreme 4 door Hardtop. Chevrolet, long knowing how to allow buyers to click off as many accessories they want, gave a bulk of exclusive features to the Caprice over a run of the mill Impala. 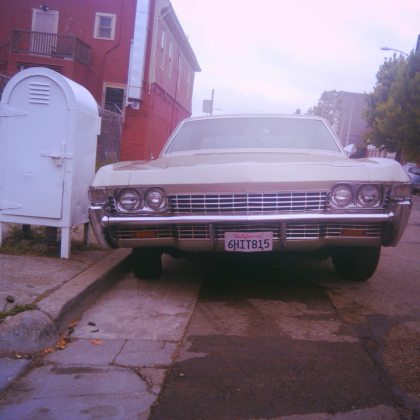 Notably, for 1968, The Caprice incorporated Flow-thru ventilation and ditched quarter glass in the front doors. This rarified piece of automotive engineering encouraged air-conditioning sales, as did the more formalized styling of the Caprice. Although the formal roofline would now be shared with the Impala Custom Sport Coupe, hidden headlamps and fender-skirts became options on the Caprice, making it more a bargain basement brougham than your ordinary family car.

The added pretense hoped and helped elevate the common Chevrolet to something not as quite out of place in exclusive settings. Sure, all of the Chevrolet details remained, including the woefully out of date Powerglide Automatic. However it was mandatory that you’d equip your Caprice with V8 power. This year this meant the newly upsized Small Block V8 in 307 cube guise. 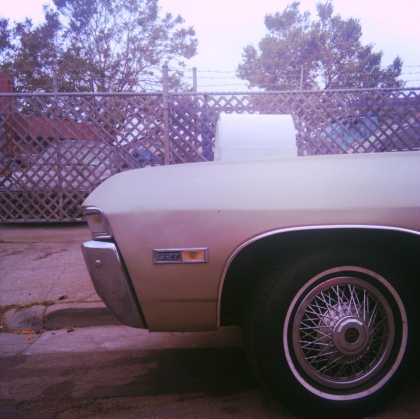 Of course, this was the indication that most luxuries in the Caprice were optional. The superior Turbo-Hydramatic, the 327 V8 found in this example or the Fiber Optic monitoring system. Nevermind your basic needs of Power Steering, Power Brakes or other power accessories like windows, seats and locks.

What may have been standard by stepping up to a Bonneville, Eighty Eight or Wildcat was all on the a-la-carte menu with a Caprice. Class by choice, how much classiness and comfort can you afford? The Caprice, for over 30 years, allowed you to decide for yourself.

Once upon a time in Oakland.
Sweet Pumpkin with a Body by Fisher.
Today in how much dick can you cram in a midsized sedan? Tina Turner & Plymouth have some answers for you.
I feel like “Car Life” always got the crappiest 0-60 times cause I’m pretty sure Frankie isn’t as sluggish to 60 as a 80hp Caveman.
Pfft.
True girth.
No description needed.
San Francisco old car photography is gonna be ruined when Turk Street Oddball & Orphans dude kicks the bucket.
Are you truly a grandchild of an American citizen unless you spent time listening to news radio in one of these or am I projecting my own experience of 1987 until my great grandmother stopped driving?
Someone’s saying “$6.59 for premium? Fuck it.”
Imperialist propaganda has been everywhere, including dead brands of Mopars.
Blueberry Lemonade.
Parking lots were more interesting 13 years ago. Or the wealthy had better taste.
@vanascabana: Lookin pretty clean 👀
Someone’s ready for hunting season.
Fall, By Impala.
It’s gotta be the town’s most expensive root beer float.
The first time I saw this ‘68 Corvair was 10 years ago. The work that’s gone into keeping it on the road is marvelous and inspiring. Keep your fingers crossed that I have a bit more money coming in so I can do the same before we run out of (or it becomes prohibitive to consume) dinosaur juice and you know get those long put off Frankie plans up and running.
This is literally the only time I’ve found an El Camino sexy.
SUPER COUPE.
Loading Comments...
%d bloggers like this: