Dynamic Divergence: Back To School Essentials – 6 Rides That Where The Lead Of The Carpool 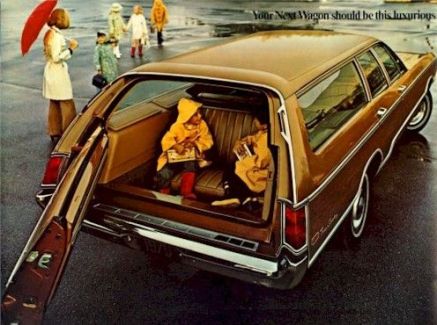 We’ve seen our nation wide open on the highways this summer. Now it’s time for us to head back to the realities of gaining more knowledge. It’s back to school season, and every big box parking lot is filled with the spoils of breeding the next generation of thinkers and doers…and spoiled brats and bullies too.

We’ve typically gone back to school in the back seats of nearly 80 years of family haulers as schools became anchors of suburban development, long out of the walking distance of the industrial revolution, yet closer in than one room school houses of America’s rural frontier myths. In terms of utility, intelligence and style, what were some of the premiere pods of the Carpool over the years? 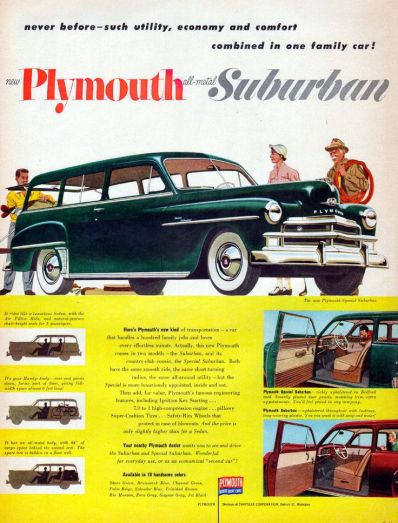 Given their context of family haulers of the Mid-Century, most forget that Station Wagons were oft the most expensive automobile in the line, often more pricey than convertibles! Even at Plymouth, their wood body station wagons were foreboding propositions in terms of price. Their solution to making cargo and people carrying versatility more accessible to the masses? In 1949 they offered the first All-Steel standard sized station wagon, with the bonus of being offered from one of the traditional “Low Priced Three.” Soon after, All-Steel wagons became the norm, although, in a number of cases, Station Wagons remained the most dear price tag in most manufacturers line ups. 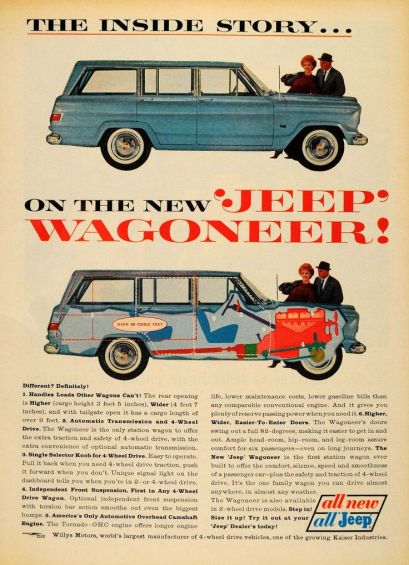 America’s belief ethic of manifest destiny comes out in the most clearly vehicular context with our obsession surrounding Sport Utility vehicles. A station wagon body to haul all that is important to take with us *alongside* rugged truck chassis durability? This is often combined with 4 wheel drive traction that’s rarely needed in everyday driving. We Americans love having all gadgets at our grasp, despite our lack of use of said items. While SUVs had technically been peddled since the Stock Market crash, few were more dedicatedly engineered to be a balance between full sized station wagons and trucks like the 1963 Jeep Wagoneer. Offering up a spacious cabin, a modern inline six (with V8 options to follow) and handsome good looks, it surely persuaded the earliest of SUV adopters to look beyond what their Country Squire could do, or the compromises a concurrent Chevrolet Suburban offered. Over a model life of nearly 30 years, it convinced many an upwardly mobile family that one way to distance yourself from the proletariat was to ride higher than the normal vehicular stance.

This did call up among my peers what was the most stylish of all mainstream rugrat haulers of the 1960s. Honestly, Ford’s over-reliance of Di-Noc wood paneling does make their 1960’s wagons seem far more kitsch than classic, often with their grain pattern fighting with details of sculpted sheetmetal on their early 60’s offerings. Mopar wagons suffered from overbaked late 50’s cues or too little difference between a basic Plymouth and a tony Town & Country over when both often shared showroom space. The style leader for the majority of the decade was Pontiac, and nothing was more pure than the 1963 line of full size cars. So vast was their influence that by 1965 cars from Ford through Cadillac imitated its stacked headlamp arrangement. While all 1963 Full sized GM station wagons shared pretty much the same greenhouse and mid-century grace, the electrifying details on the Pontiac offerings set the bar quite higher, especially when paired with the legendary 389 V8.

If there’s one Station Wagon that still carries its cachet nearly 40 years after it was introduced, it’s none other than the seemingly indestructible W123 wagons. Even with half a million miles, a well preserved example can demand a premium on par with a new compact car. While the Touring wagon was available with various drivetrains, most single out the Type OM617.95 5 cylinder diesel as the perfect combination of power, efficiency and durability that allows these cars to match the extreme craftsmanship baked into these cars. Whether in beautiful or basket case state, it’s the definite ride to procure (you can run it on old fry grease if need be and the parts supply network is stronger for them versus any GM Diesel Wagon or Peugeot) should we experience societal collapse before next semester. 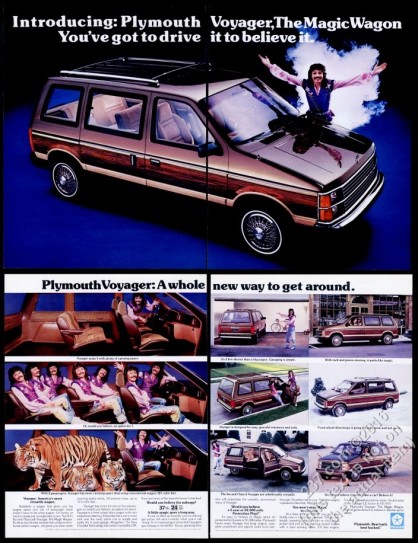 It’s been 35 years more or less since we met the modern minivan. As Xennials start having kids, we shy away from anything that reminds us of our own childhoods, much as our Boomer parents ran away from 19 foot long full sized station wagons suffocating under de-bored V8’s or exploding diesel powertrains during the “Mo(u)rning In America” Eighties. A flat floor, seating for 7, and a sliding door that eased access to most of the cabin proved what America really wanted was a tall K-Car if they chose to honor the vows they made after ‘Makin’ Whoopee.’ Granted all the flaws of the K Car, namely you either get an underpowered 4 cylinder or a slightly less underpowered one that blew head gaskets, along with this newfound versatility. The Mitsubishi sourced V6 that came online in 1987 at least got you to its ultimate demise faster. As we’ve nearly depleted and increased the values of all boomer-era midcentury classic cars, it’ll be interesting to see how soon collectors will start to respect the charms of the first modern mass-market people haulers that didn’t threaten to crush your legs (side eye to the Volkswagen Bus and all Forward Control proto-minivans).

We close out this list of iconic people haulers with what is possibly the grandfather of our modern family car. Given 3 box sedan sales are in perpetual decline, we have to give the tip of the hat to the first lightweight, unibody Sport Utility Vehicle, the XJ Cherokee. By adding the ease of 4 doors to their planned new SUV, American Motors hit a wonderful sweet spot between engineering prowess and desired customer base buy-in. Supremely rugged, durable and surprisingly fun to drive, with updates, the XJ Cherokee stayed in production for 18 years. With enough space for humans, all of the shit we buy and the theory (and in a rare case the ability to execute) of being able to go anywhere, it’s perhaps the most American car of all time. For every CR-V, Rogue, Escape and RAV-4 sold today as a new way to head to Target, a tip of the hat is deserved to this pioneer.

2 thoughts on “Dynamic Divergence: Back To School Essentials – 6 Rides That Where The Lead Of The Carpool”

Who wants to help me do these valve cover gaskets Memorial Day weekend? Thanks to California Corvair for always being prompt with the parts!
Thinking about the politics of space and the relentlessnesses of white violence.
Who out here sincerely wasting a full ass upper income salary on a goddamn '73 Cutlass?
The feather in the cap of any HT era Cadillac is the pretty possible reality that you’ll outlive your owner.
They don’t build excitement like they used to.
Here have a hot fox wagon.
Mopar or no car and all that jazz.
🧹*Spring Cleaning* 🧹
Lubrication is super important to keep tight spots moving from all that thrusting & twisting.
…and no I didn’t come home with another Corvair.
A little 1965 double play in the driveway this evening.
I smell a Pulitzer….
One day western history will let go of the manifest destiny sole creator myth but until then i remind y’all where there’s one white dude getting all the credit, there’s always a team doing the grunt work and getting their ideas stolen.
Still a favorite/might be the best station wagon of all time.
For reference I’m 5’11 and the bed of this truck is above my shoulders…
Plz no more career advice about writing about cars I don’t need to live a combo of “Get Out” & “Christine” kthanksbye
Raise your hand if you’re laughing at everyone with a SUV when they realistically only need a Camry Hybrid.
Who knew it would be a delight to see the oval Taurus 25 years later.
@vanascabana - “I love seeing shit like this because you know they’re like over my dead body am I gonna buy a new car.”
Lol.
Loading Comments...
%d bloggers like this: