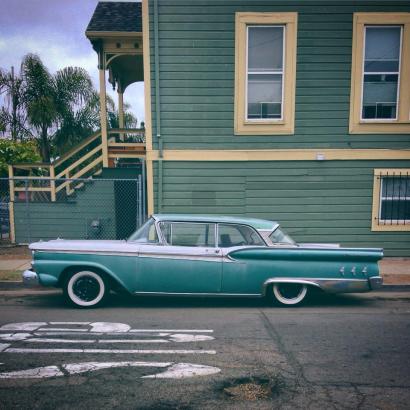 Only in 1959 would this be considered the most conservative mainstream automotive choice. But in a field that offered the last of the Suddenly, It’s 1960! Plymouths and the Batwing Chevrolet, the Full sized Fords found themselves in a similar position to the 1957 Chevrolet.

They came to the market upright, with most of the teething problems from previous seasons mostly filtered out. In the year reeling from a decade of even more debaucherous vehicular access (some of them still in the Ford Extended Family showrooms), the 1959 Ford was an automotive Alka-seltzer that would wind up walking away with the ultimate sales prize by the end of the year.

END_OF_DOCUMENT_TOKEN_TO_BE_REPLACED

Who wants to help me do these valve cover gaskets Memorial Day weekend? Thanks to California Corvair for always being prompt with the parts!
Thinking about the politics of space and the relentlessnesses of white violence.
Who out here sincerely wasting a full ass upper income salary on a goddamn '73 Cutlass?
The feather in the cap of any HT era Cadillac is the pretty possible reality that you’ll outlive your owner.
They don’t build excitement like they used to.
Here have a hot fox wagon.
Mopar or no car and all that jazz.
🧹*Spring Cleaning* 🧹
Lubrication is super important to keep tight spots moving from all that thrusting & twisting.
…and no I didn’t come home with another Corvair.
A little 1965 double play in the driveway this evening.
I smell a Pulitzer….
One day western history will let go of the manifest destiny sole creator myth but until then i remind y’all where there’s one white dude getting all the credit, there’s always a team doing the grunt work and getting their ideas stolen.
Still a favorite/might be the best station wagon of all time.
For reference I’m 5’11 and the bed of this truck is above my shoulders…
Plz no more career advice about writing about cars I don’t need to live a combo of “Get Out” & “Christine” kthanksbye
Raise your hand if you’re laughing at everyone with a SUV when they realistically only need a Camry Hybrid.
Who knew it would be a delight to see the oval Taurus 25 years later.
@vanascabana - “I love seeing shit like this because you know they’re like over my dead body am I gonna buy a new car.”
Lol.
Loading Comments...