Perhaps a Solid Gold Cadillac is a bit of a cliché. But by 1954, Cadillac was pretty much the solid gold standard in American Luxury cars. Their value outweighed and outlasted previous prestige players. Lincoln had migrated into being the darling of road races and Ed Sullivan but no necessarily showroom sales.

Packard found itself in a marriage of desperation to Studebaker and the desired feast for more finned beasts that soon would eventually take their Clippers and other confections to an untimely grave. All the while, Imperials were still technically top rung Chryslers, more image aligned with Buick Roadmasters and Limiteds than Cadillacs.

It wasn’t just style, but a healthy bit of substance (and sheer weight) that made Cadillac creations the then Standard of The World as the Mid Fifties frivolities really got underway.

Along with the latest in massive GM body work came supple “Florentine Curve” rooflines with wrap around windshields, 12 Volt electrical systems and ever increasing horsepower from the 331 Cube V8 funneled through the premiere Automatic gearbox in the country, the Hydra-Matic.

Owners praised and marveled at the stability, swiftness and silence of their purchases, and perceived and actual quality led to word of mouth praise, worthy and sometimes not so worthy. 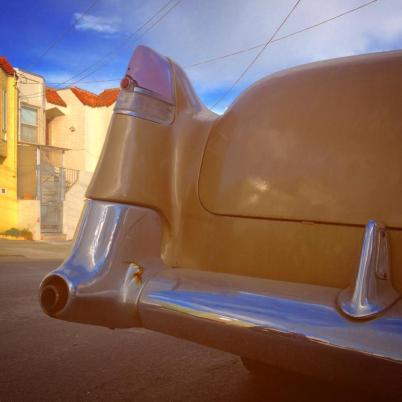 Connoisseur consensus at the time told many Americans (and quite a few abroad) that there was nothing finer for your purchasing capital than a Cadillac. You might as well have considered your purchase golden.

There’s debate of whether this was the beginning, middle or end of the golden age for Cadillac. As more demand was placed on the desire to own one, more production capacity was added, and less exclusivity was boiled into the actual models. Whatever your opinion, this particular owner of this buxom beauty does believe that it’s worth the weight on it’s 4 tires as golden.