By 1966, Lincoln was through with making due with a two model system of a basic 4 door Sedan and the ultra-rare and unique on the American market 4 door convertible. The standard bearer of post-war automotive affluence, the Two Door Hardtop Coupe, returned that year, and grew ever more distinctive each model year.

Like rival Cadillac, as the 1960’s wound down, the Wixom Wares in coupe form came in two distinct flavors. Towards the end of the 1968 model year, the Continental Mark series returned with a re-imagined Mk III.

The slightly smaller and more exclusive Mark paralleled the new relationship Cadillac crafted between the traditional Calais/DeVille coupes and the Eldorado starting in 1967. The Continental Coupe would continue to court luxury buyers that believed size mattered. The expense of their new ride should be represented by the sheer length and girth mattered, which the 1968 Continental Coupe provided in spades.

At nearly 221 inches in length, the Continental wasn’t the absolutely biggest luxury coupe you could buy in the late 60’s, but it sure didn’t skimp on what it had to offer. A host of convenience features were standard with admission, along with may opportunities to tweak the luxurious experience. The long soldiering MEL Block 462 V8 was slowly phased out through 1968, as the Ford 385 series 460 V8 became the motivating force behind the 5,000+ pounds of exquisitely crafted bulk.

Styling changes included a more formal roofline that introduced the look soon to be worn by the Mark III. Up front, formal wrap around turn signals rode the chrome capped blade fenders and horizontal grille present since 1961. The grille pattern became ever more busy and bold for the model year as well. This theme repeated out back as wrap-around tail lamps returned with ribbing similar to the 1965 models. Reverse lamps and reflectors took the place where tail lamps had occupied the rump of the refined Conti in the previous two seasons.

Inside found buyers in a plush, well crafted and assembled isolation chamber with only speedometer and gas gauge to keep one consistently updated on the status of their vehicle.

As outwardly bulky the Coupe was, it wasn’t as palatial with space as one might expect, as the Sedan still provided maximum grace for ease of entry and exit for all passengers. Also, given the introduction of the more exclusive Mark III, the Continental Coupe found itself in a far less unique place in the market for 1968. As Luxury buyers diversified their choices, fewer plunked down their plentiful dollars on the big coupe model. Sales slid for the Continental from the generational peak in 1966. 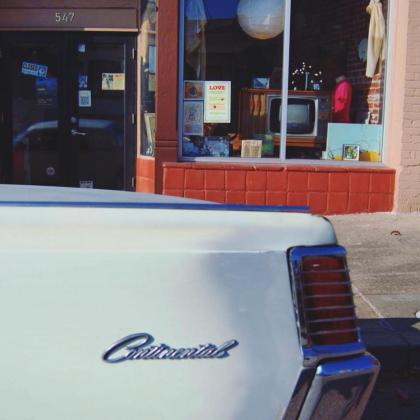 Decidedly more than a few Lincoln customers shifted their attention to the Mark III. Mark III production for the remainder of the 1968 model year was nearly 75% of the production total of the Continental Coupe, which had been on sale since September of ’67. Nevertheless, the big Continental Coupe would be a mainstay in the Lincoln line up from 1968 all the way through the 1970’s and into the early 1980’s.

More festooned with mainstream concepts of luxury, less with the refined regal air of the Camelot-era Continentals, the later day big Lincoln Coupes don’t have the suave swagger of the 1966-69 examples. Rarefied and presented with well done details, they are the best example of American Automotive Prime Rib.