So much of the narrative attention given to the Edsel brand is given to the first year cars. With high expectations and projections of greatness, the ultimate failure to meet the mark sours the story of the whole brand.

It decidedly makes the 1959 versions a case of “why bother?” Indeed, the Edsel was a Ford in a gaudier suit when Ford could ill afford the expense of tailoring a new set of clothes for an old body. One would also have to look at the case of saving face and not throwing in the towel as well. The 1959 Edsel in Ranger and Corsair guise were the inevitable placeholders before the eventual march off into oblivion.

The biggest change for the 1959 Edsel line was the models that were missing. The series count went from 4 to 2, as the just above basement Pacer and the top of the line Citation moved to the used car lot in the sky. Also gone was the usage of the Mercury body, and any concept of a “Senior” Edsel in the way General Motors quite often had “B” and “C” bodied Oldsmobiles and Buicks.

It all pointed to the failure of a master scheme for a “Super” Mercury to compete with Buick’s Roadmaster and Oldsmobile’s Ninety Eight. As Mercury sales themselves dwindled in 1958, they were given exclusive usage of their bodies back for 1959 and 1960. Of course, Mercury itself fell to earth and once again became a Fancy Ford for 1961. 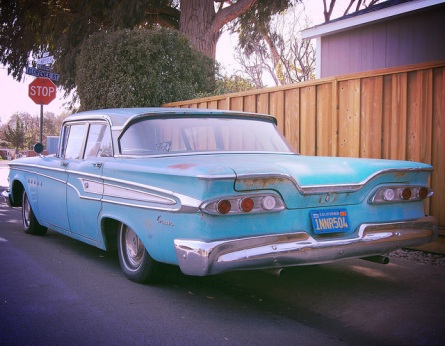 What was left, however, was a glitzy re-iteration of the 1957 Ford that, oddly, pushed the Ford brand upmarket into the quasi-medium priced market in the first place. By 1959, the basic quality demons that had plagued the first two years were mostly under control. By association, this meant, especially in lower demand, more focused production, that the 1959 Edsel benefited from quality control improvements as well.

Milder interpretations of Edsel styling features from the inaugural season appeared on the basic boxy Ford Body for 1959. The Horsecollar grille was no longer a free standing feature of the face of the Edsels, and perhaps thankfully lost comparisons to the labia majora on the way. 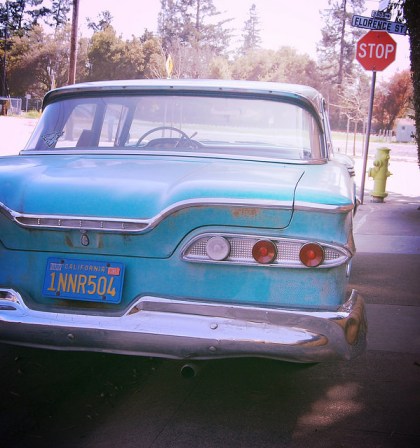 Now integrated into the grille and bumper at a reduced size, it made for a far less polarizing face. Out back, tail lamp lenses lifted from the 1958 Continental sat in a broad plain where the 1958 Edsel hung optional reverse lamps below their gull-wing tail lamps. The graceful arch of those tail lamps still found itself a distinct imprint on the fenders and decklid of the 1959 models, however.

A slight shift in the engine bay happened as well. Although not offering junior Ford Powerplants like the Ranger did, the Corsair did adopt the weaker chested 332 cube FE Series V8 in 225 Horsepower Strength. This put it far below rival Pontiac and a few steps behind Dodge. The previous year standard 303 horse 361 version of the FE V8 available as standard in the Ranger and Pacer became the top tier model as consumers as a whole took the late 1950’s off from maximum performance and shot a keen eye toward economy when necessary. Gone for good was the one season only 410 Cube V8 with a rootin’ tootin’ 345 horsepower that gave the Corsair rather brisk performance the previous season. 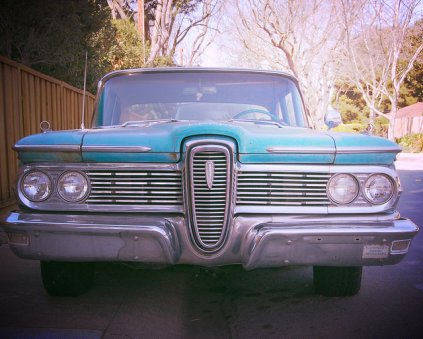 The true “why bother” came as the 1959 sales totals rolled in. While a number of brands posted slight recovery figures from the disaster that was 1958, Edsel’s fortunes dwindled from the mild high that it had in 1958. Edsel had finished close enough to 12,000 units ahead of DeSoto in 1958, but for 1959 the old stand by slightly bested the other weakest player in the Mid-Sized field by a few thousand units. Surely this was nothing to brag about as Pontiac, Oldsmobile and Buick still dominated the medium priced market. Robert McNamara had enough, and a small run of re-trimmed Ford Galaxies constituted the run of 1960 Edsels as the “Comet” was re-purposed as an “independent” compact in the Spring of 1960 eventually given full credit as a Mercury.

It sadly became the a case study and the brunt of automotive jokes for decades to come. As they stand, every surviving Edsel has a fascinating story to tell about how consumer culture, due to a number of factors, is the most risky gamble one can place a bet on.