Studebaker, independent manufacturer always willing to take a risk, was no stranger to creating stylish coupe models during the post war era. Had it not been for the advanced styling that Studebaker took in the personalization of the average automobile, many mainstream manufacturers may have not taken heed and offered their own wares.

Had it not been for the unique Starlight Coupes, General Motors perhaps wouldn’t have retaliated with their “Hardtop Convertibles” in the guise of “Coupe DeVille” “Riviera” and “Holiday at Cadillac, Buick and Oldsmobile in 1949. Perhaps the world would have continued appreciating the divide between carefree convertibles and stoic sedans. 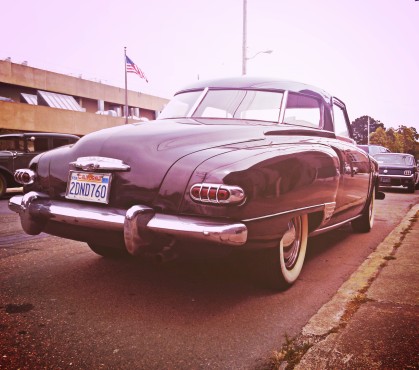 It seems it was perfectly intended that the stunning Starlight Model was to create a sensation in Studebaker showrooms, even though it didn’t become the best seller of the refreshed Studebaker line. Although envelope bodied 1946 Kaisers and Frazers beat it to the market, Studebaker was the first established manufacturer with a completely newly styled car. The slogan shouted “first by far with a post-war car!”

With the addition of the unique Starlight, they might have been really onto something. The daring use of curved glass over the extended deck lid changed the way automotive styling was regarded for nearly 15 years. First in a trend of Longer, Lower, Wider,  These new Studebakers made design studios throughout the world sit up and take notice.

In certain ways, the Starlight created the genre of the “Personal Coupe” a good decade before the 4-seat Thunderbird fully popularized that automotive genre. Granted some of the inherent compromises of function following form of that category of automobile were inherently present in the Starlight Coupe. For one interior volume wasn’t as copious as it would be in comparable sedan models.

But the new look outside also set trends with more glass area than usual for the era on the inside as well. A new emphasis on open, airy designs to better let in the world one traveled through (and to eventually spur automotive Air Conditioner sales) would be seen as other manufacturers first slimmed A, B, and C pillars, then offered one piece windshields and Hardtop coupes as the brave new world of less cocoon orientated cars came online during the early 1950’s.

Underneath it all, refinements of the smaller Champion chassis dating back to before the war, and an absence of super exclusive President Models and 8 Cylinder powerplants re-cast Studebaker more towards the mass market, and the brand enjoyed some of their healthiest sales and profits the brand would ever see. 1948 proved to be the most popular year of the Pre “Bullet Nose” Studebaker Commander Starlights, with just under 14,500 units reaching customers in that sellers market year. The lower priced Champion version gathered even more customers. As it stands the 1947-49 Studebaker Starlight coupes were Studebaker’s most successful attempt at offering a unique coupe to customers. They’re still a magnificient sight to behold today, nearly 70 years later.