The Ford Thunderbird saw many persona changes to cope with the changing times throughout its life as a personalized chariot for a select few. From luxurious sports personal convertible to overwrought George Barris Custom to fascinatingly land bound ode to space and air travel, to suburban bordello on wheels, where was the Thunderbird by the time it turned sweet 16?

In reality, it faced its first true identity crisis. Due to some new beauty standards in the field, the Thunderbird underwent a major dose of rhinoplasty to keep up with newer, fresher faces influenced by a new boss from a new studio. As the Thunderbird transitioned to adulthood, we look at what the awkward adolescence looked like. 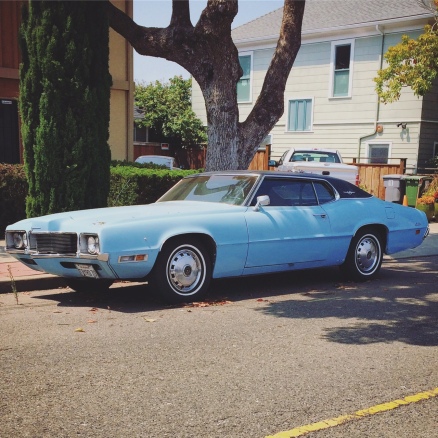 Although the Thunderbird carried itself as the king of the Personal Coupe Pantheon for the better part of its existence for the majority of its life, there were starting to be inroads to its dominance by the late 60’s. Younger affluent buyers went more the route of adding luxury options to their Mustangs, Camaros and tellingly, Cougars. By 1969 Pontiac decided to de-futz their Grand Prix from its burgeoning size as a custom job on a regular Full-Sized Pontiac bodyshell for an extended intermediate platform with fully unique neo-classical styling that set it apart as unique from anything in the General Motors stable, the first attempt for GM to do so since the ’63 Riviera. Sales blossomed with the more youthful image in 1969. The Thunderbird, long gone baroque with landau bars and a close quartered 4 door sedan replacing the Convertible in 1967, had lost this youthful flair, seceding such roles primarily to FordMoCo’s rampantly popular pony cars. 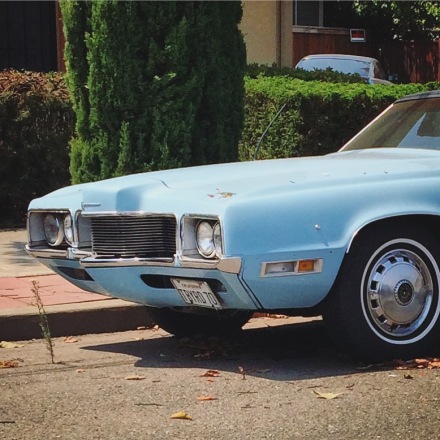 However, the innovator of the personal lux field couldn’t get lost among new competition, not only from above as it had been fending off the Eldorado, Riviera and Toronado since the mid 60’s, but the youthful upsurge from Pontiac, and a former Pontiac executive influenced one last ditch effort appeal towards the youth market at the end of the decade.

Not only was the Thunderbird offered with a new face with a protruding “beak” but now on offer was a semi-fastback model dubbed the Sports-Back as well. The new sporting persona of the Sports-Back was thrown into huge contrast against the formal coupe with its huge blind “C” pillar, nevermind the 4 door sedan. Semon “Bunkie” Knudsen, who had been the hypeman behind Pontiac’s ascendancy to #3 in the industry during the early 60’s, influenced the more aggressive face for all Thunderbirds, alongside the sporting coupe variation.

Underneath were some of the fastest, best handling and most refined Thunderbirds offered before the gas crunch. The Body-on-Frame design employed since 1967 was slightly lighter than the Uni-body versions employed before. With now 360 horsepower standard, they were no longer the docile chariots they had been at the beginning of the decade. Suspension refinements and extra sound insulation to Continental Mark III standards actually made it sort of a bargain.

In a year that saw the debut of the Chevrolet Monte Carlo and a newly formalized Oldsmobile Cutlass Supreme, this refresh didn’t necessarily facilitate a huge spike in sales. Total sales across the line topped 50,000; marginally better than 1969, and well behind the cheaper competition. This intermediary approach would give way to the bargain basement Lincoln treatment for 1972. Sometimes you can’t keep up with the brat pack.