It’s weird to be David when your dad is Goliath. Compounding the dilemma is there’s always a series of giant killers out to strike down that object that towers over them. Here’s where we find the Chevrolet Corvair for its 6th Season, first comprehensive re-design standing in full embrace of its most appropriate mission statement.

Gone were the pretenses of being an economy machine. Gone with the wind was any pretense to really run with the pack of other jocks. The Corvair was General Motors first home grown international game player. Too bad dad was withholding of any true affection. 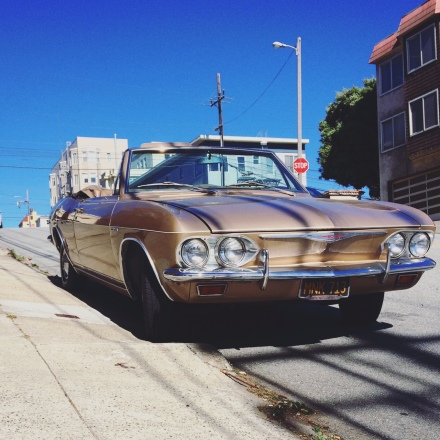 The Corvair was, first and foremost tailored with a new suit for ’65. Borrowing the best ideas from both Detroit genius and a healthy dose of Italianate flair, the Corvair moved from being one of many adorable dorks in the class of American Compact Cars to a gorgeous specimen of an American that had spent a season studying abroad.

Gone were awkward details like B – pillars for coupes and sedans; all Corvairs were now Hardtops to go alongside the pillar-less convertible. The flowing graceful lines were only a few inches longer, a few inches wider, and prices didn’t jump all that much either.

Inside found a dual cove instrument panel that dispensed with the Americana orientated ribbon speedo in all models for sportier circular gauges. For models like our Corsa Convertible, the buyer was treated to a Tachometer to keep up with their flings through the rev band. As the Corsa took the place of the Monza Spyder for ’65, it was treated not one, but two performance options.

First up was the 4 x1 barrel carb equipped 164 cube Flat 6 with 140 horsepower on tap. No longer in danger of suffering catastrophic engine damage during self shifting between ranges, you could know get the flossiest Corvair with the Powerglide Automatic. However, for those seeking a little bit more of a thrill, the Turbocharged deck that first saw light in 1962 returned this year with 180 horsepower, uprated from 150 horses from the first generation cars. When selecting the Turbo engine, you forfeited access to the Powerglide and Air Conditioning as well.

Underneath all of that new included the most significant change to the Corvair in the redesign. The original Swing Axle suspension had been a source of concern all the way back in the development stages of the Corvair in the late 50’s. The camber compensating leaf spring installed for ’64 tamed many of the hairtrigger traits of that design.

For ’65 Chevrolet modified the lessons they learned from the fully independent set up from the ’63 Corvette. With coil springs at every corner and a faster steering ratio, not only was ride quality improved, but handling became perhaps, in irony, some of the best on offer either in base or performance set up from any American car on offer in 1965.

America doesn’t really love our dancers though. The cumbersome ballerina that was the original Corvair garnered enough bad press. America does love brute force and being a champion. By the time the Corvair graduated to a level of sophistication that belied its station as the odd duck out in America’s most mainstream automotive family in the fall of ’64, The Ford Mustang had been a runaway hit with everyone enamored with more phallic proportions backed up with the thrust of a V8 engine. While the Corvair could readily outdance any Mustang, only the top line Corvair Corsa with the 180 horse Turbo stood a chance in a straight line against a Mustang with the base 260 V8. It became a dodgier proposition once the 289 Windsor V8 seceded the smaller 164 horse unit during the ‘Stang’s extended first year on the market.

The Mustang also offered a far more American purchasing experience. From being a more stylish Falcon to a junior Thunderbird, it captivated a larger swath of common American aspirations.

Those seeking the Corvair at this stage more or less wanted a Fiat, Lancia, Volvo or Triumph with the Chevrolet Dealer network, optional Air Conditioning, passable performance up to U.S. interstate standards of 70 mph cruising wrapped in styling flair that was envied (and copied, looking at you BMW coupes) all the world over. The pool of buyers for class acts is always smaller than those that want excess for as much of a bargain as possible. 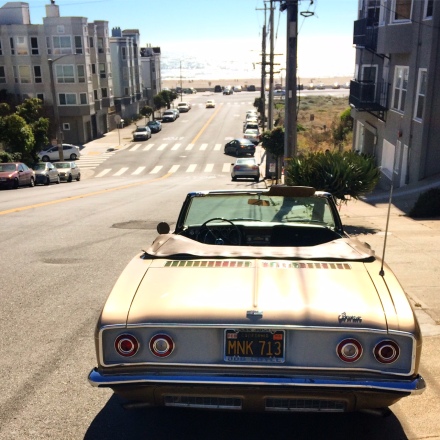 The Corvair made a lovely showing in production numbers for ’65, as over 237,000 units found buyers. But that stood in the shadow of the Mustang’s success, or even buyers eating up the not too much more expensive and well regarded re-designed ’65 Impala, or the other options in the Chevrolet showroom. It’s amazing to look at more than a quarter of a million cars being sold as a failure, a loss battle, but the ’65 Corvair, as David, suffered. Less than half of that number went out the door in ’66, and as lawsuits and bad press from the first generation car piled up, the Corvair more or less was a beautiful zombie forced to face the world for 3 years after its parent pulled the plug.

There’ll never be another consumer outsider so beautiful and so deserving, yet outcast for being the child of a greedy parent. For all the little flaws the Corvair embodied, it shows the deepest wound at the heart of our consumer psyche.