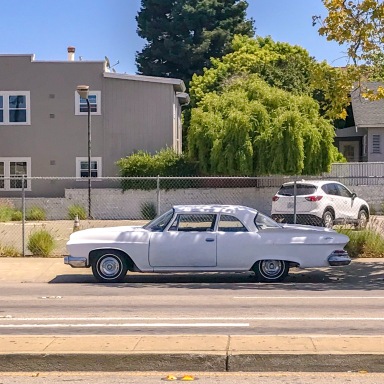 Strange times call for strange subjects, correct? Nothing gets more absurd and always great for examination when it comes to automobiles than the products Chrysler Corporation produced between 1960 and 1962.

None of them can be considered, even in the context of the later googie-interstellar design influences throughout product design, ‘normal.’ They all beamed down from outer space and asked to be taken to our leaders. Strangest of all might be the collective 1961 line. The friendliest face, with the most devastating mission, would be the line of 1961 Darts. Granted the Dart line up of 1960 had already did plenty of damage to the order established on the planet Mopar. 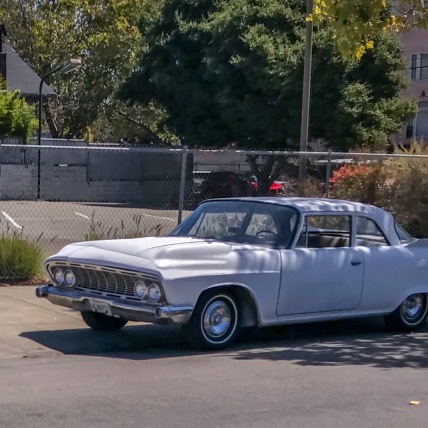 The $50 more than popular brands increased Dodge’s market share, but not to the detriment of anything inhabiting the lower end of the middle class medium priced market from other manufacturers.

Pontiac remained Prince Charming in that field, Oldsmobile got enough Dynamic 88’s and Buick a healthy number of LeSabres out the door. Mercury, somehow, hung in there.

Yet, Plymouth and forever sibling rival DeSoto took the brunt of Dodge expanding their territory down. Although the Matador and Polara chipped minimally at what was left of DeSoto, the new Dart series, which more or less was a full sized Plymouth in chintzy costume pearls for the Dodge brand ran away with what used to be Plymouth Fury sales.

Granted, Plymouth in general, had stayed within their puritan image which they always struggled with. In comparison, Chevrolet, and moreso Ford, were able to provide fancy on a budget to their customers not prone to move up the status ladder.

Those gains were put on the launch pad for 1961. Instead of successfully launching another satellite into orbit, the works exploded in a violent rejection of what was considered good taste. 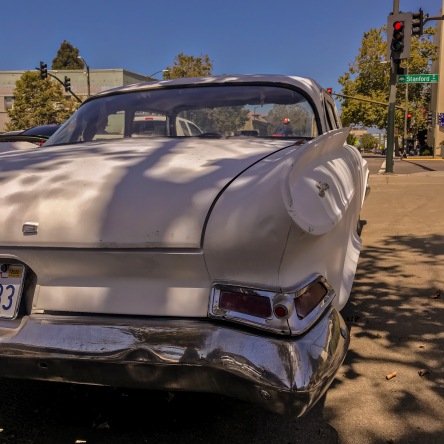 While the 1960 Dodge line wasn’t the best looking offering that year, it didn’t offend the eye any more than a number of over-trimmed competitors. The 1961 Dodge line however, from the goofy jet intake grille, to the heat dispensing louvers on the hood between ridges on the fenders presented a very mutant shape.

It didn’t stop there. In a year that brought the public the subdued elegance of the Lincoln Continental, Dodge decided to bring the reverse slant, convex curve tail fin. While in the more premium Polara these fins made way for imbedded tail lamps, on the Dart they lived in their full glory, leaving the tail lamps as an afterthought placed right above the bumper.

The real world problem was that these tail lamps were not visible to most following drivers, even in the era of longer, lower, wider. The tail lamps cast their light skyward, so following drivers had no clue what the owners of Darts were intending with their movements.

By mid year, auxiliary stop lamps were hastily added as an option to the fins, creating another awkward design element. Of course, despite some still niggling build quality issues, these Dodges were still some of the finest performing full sized cars on the road for the price. The base 225 cube Slant Six was the most modern and powerful domestic Six offered in a full sized car.

The 318 V8 balanced economy and performance well, and the 361 V8 in such a light body was more than willing to do battle with competitors with more cubic inches. It was also aided by Highland Park’s now signature Torsion-Aire Ride and oft backed with the bulletproof Torqueflite automatic.  Nonetheless, people aren’t very accepting of things that are different, especially if the looks are alien to even the weird times they’re actually super representative of.

It was an era where most people thought Jello Molds were a great way to get children to eat vegetables. While the 1961 Dodge line looks like a rational representation of what people were driving during that period in which Fall Out Shelters dotted suburbia, it was one of many resounding failures for Chrysler Corp in the early 60’s.

Sales fell by close to 50%, with just over 66,000 of the price leading Senecas like our sample car finding buyers, versus over 110,000 the previous year. Of course, even worse came for 1962. Even in weird times, there’s still a bridge too far.

If we ever wondered where my love of Corvairs came from we can blame the 1986 edition of The World Book Encyclopedia + my dad saying “oh yeah, that was my first car. A 1960 Corvair. But mine was red. It threw a fan belt on the way to Pleasanton and that freaked me out so I got a ‘62 Dodge Lancer.”
Mid Century Mercedes
Your Astrological “Big 3” as vintage cars, Capricorn to Pisces.
Your Astrological “Big 3” as vintage cars, Libra to Sagittarius.
Your Astrological “Big 3” as vintage cars, Cancer to Virgo.
Your Astrological “Big 3” as vintage cars, Aries to Gemini.
Today in dystopian 1965 Corvair Commercials….
Mid Century Maverick.
When you almost test drove a ‘71 Torino GT for the shits and giggles….
Today in spot the gay real estate agent obsessed with mid century modern….
I’m guessing this is way too mild to submit to @truckslutsmag but then again I haven’t properly slutted up my Corvair yet.
Fucking go to hell. Fucking y’all don’t even make good cars anymore @cadillac what self respecting queer would jump on your bandwagon of trying to sell pride to buy a goddamn CT5….
California’s Gold (RIP Huell)
Yeah I haven’t gotten much of w chance to drive you in the last 6 weeks but thanks for always firing up.
Federal Speedometers and Font Snobbery.
I posted this as part of a #pride mood board on Twitter. It always amazes me how hot a piece of ass dude rock climbing in this 1969 LTD ad was. And we think Sal Romano was the only homo in advertising.
Lines, Angles & Rhymes (name that artist).
Fake trees, real trees and probably a little bit of cocaine.
It’s weird to love an appliance.
On this day we remember one of the greatest liberation activists the United States ever saw was a former sex worker, bisexual and an Oldsmobile owner. Happy 96th Brother Malcolm.
Loading Comments...
%d bloggers like this: