The truth of the matter is, even if the Ford Thunderbird wasn’t the absolute best choice in its field, it definitely found itself being a trend setter. Although I don’t consider it the first and foremost Personal Luxury Coupe it did carry the sales torch in that genre for more than a decade.

Glittering gadgets, glamour and unique styling were one way that the Thunderbird stayed ahead of the rest of the personal nests from the best of the manufacturing world. In 1962, Ford tested two distinct oceans of taste. One of those was an homage to the baby bird stages of the Thunderbird’s life, and another that would see it through many years of middle aged bloat before it became a fit senior citizen.

The dip into past glory came with the introduction of the Sports Roadster. Through the miracle of fiberglass, those who missed the darling 2 seat birds of the Mid-1950’s could relive the youth through looks, if not driving dynamics and performance. The other direction is our feature car, the new Landau model for 1962. Vinyl roofs were all the rage on newly squared off hardtop coupes from all brands (notably Buick, where they were popular options on Skylarks and standard on the new Wildcat).

Where the Thunderbird went a step further was adding a dainty, campy carriage “S” bar more reminiscent of hearses than specialty Super-Highway mile eaters. Although Ford didn’t keep production tabs on the Landau in its first year, a healthy number of the 68,000 Hardtop coupes were befitted with the new option. 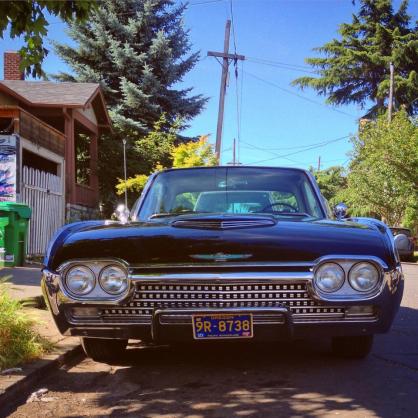 Despite the new frivolous hat for the coupes, you still got the exquisite (almost overbuilt) Junior Lincoln the Thunderbird was in numerous ways. The Thunderbird for 1962 had long given up ambitions of taking down Corvettes and carving up mountain passes. As more and more competitors from different brands tried to knock out of the sky, the Thunderbird concentrated on what Americans do best: Showing off in public.

It’s an interesting blend, a thin line between culture and crass; The Ford Thunderbird walked that thin line quite often. Quite often it was the most honest car for American Middle Class consumer aspirations. If you’re going to spend *that* much money on a car, why go for a demure Buick or Oldsmobile?

The Ford Thunderbird has often been American car buyers “Auntie Mame” in showrooms. It’s often said Life is a banquet, and most poor suckers are starving to death! Many an American consumer has been seduced like Agnes Gooch and have heeded the call to “Live.”