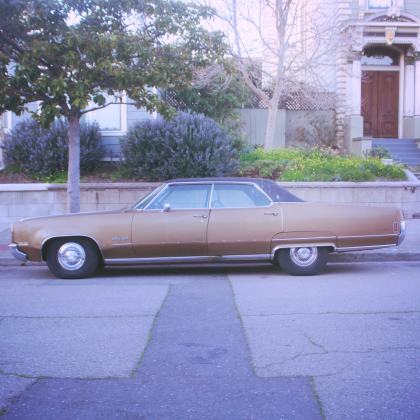 The Oldsmobile Ninety Eight had made a career of stating “why buy a Cadillac?” The distance between what the Oldsmobile offered at a 25-30% discount over a comparable edition of The Standard Of The World often made the Ninety Eight seem like the most sensible sensation in the Near-Luxury field.

Quite often, the details of this most premium of Oldsmobiles actively upset product managers at Cadillac. The “Deep Discount DeVille” matched with the sterling reputation Oldsmobile cultivated for decades, but most importantly in the post-war market, set the groundwork for the brands stratospheric rise during the “me” decade of the 1970’s which found the brand even ahead of Ford at points for the #2 spot on the sales charts.

Oldsmobile found itself playing mixologist better than any brand inside or out of General Motors for a number of years. Mixing well thought out engineering and quality with momentary flashes of innovation made sure loyal buyers kept coming back for more. By 1970, most of the more extraneous flirtations like Aluminum V8s, Turbocharging and low stress “Turnpike Cruiser” economy options had died or were being ignored.

In the meantime, a strong stable of stately sublime suburban cruisers sat in showrooms across the nation promising confident cruising at its best, without the burden of extreme pricing. The Goldilocks slot within the General Motors hierarchy proved just right as people signed up for Cutlasses, Supremes, Eighty Eights (now in Delta Strength) Toronados and Ninety Eights in an amazing array of features and color palates. 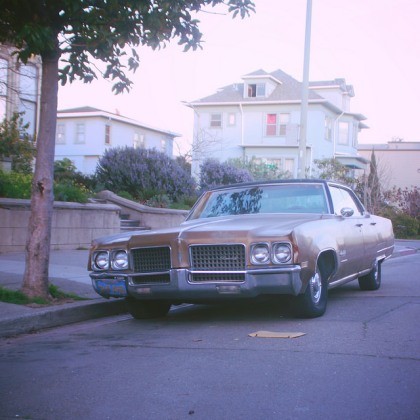 The Oldsmobile Ninety Eight, like the Buick Electra 225 was the most paramount way to experience the spoils of their respective brand experiences. While the Deuce and a Quarter fostered its own image to be less Cadillac adjacent, the Oldsmobile Ninety-Eight pulled no punches about polishing its gem-like status with a few borrowed glad rags.

As the decade turned, The Ninety Eight traded its most voluptous curves of the Mid 60’s for elegant and upright restraint befitting American Luxury cars expected to make Supper Club appearances. Since 1963, the Ninety Eight favored the long dangling earrings of “Cathedral” tail lamps that mimicked, but not outrightly copied the vertical tail lamp arrangements of contemporary Cadillacs. The play-dress got more intense if you stepped up to the Luxury Sedan version. With Fleetwood imitative interior details, the Luxury Sedan version quite often made Cadillac cry foul at Oldsmobile for offering chauffeur driven limo grade interiors in a tract house price range.

Add in the ever so awesome 455 Cube version of the Rocket V8 backed by the Turbo-Hydramatic automatic, and you have a swift, silent place to count your savings compared to your neighbor who pinched, pulled and strained to get into their shiny new DeVille. As the 70’s opened up, Oldsmobile shot their second bullet from the SS Ninety Eight in the form of the Regency. With fittings far above and beyond what Cadillac offered in its base cars, it proved Oldsmobile knew best how to exploit all sections of the sales market. Unfortunately, with success comes overinflated egos, and the best basics of the formula would soon find its way lost.

Oldsmobile, like all General Motors divisions, lost their autonomy in the pursuits for lower costs and higher profits. It’s a corporate lesson oft-repeated and seemingly never learned from. Had Oldsmobile continued to strike the balance of robbing the goods from the rich to serve the needs of the poor, perhaps they’d still be around. Then again, unfortunately, the economic power of those who used to buy Oldsmobiles isn’t quite what it used to be.

Perhaps Oldsmobile was the canary in the coal mine all along. Prophet to automotive consumer trends, prophet to the stagnation of the American Middle Class. There’s so much of a book when cars write the story.