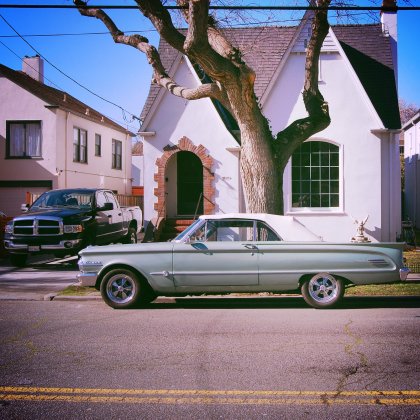 Fuller and Fancier than the Falcon, the Comet had carved out a pretty succesful niche as being a borderline Mid-sized entry level medium priced car in the early 196o’s. As the Falcon added to its repetoire, so did the Comet. For 1963 that mean a few more shots across the sky in hardtop coupe and covertible form. Not only was the fun in the way to accesorize your roofs, some new, some would say needed, zoom was available under the hood as well.

As compact cars struck different fancies in the ever diversifying American Automotive market, the Comet wanted to woo you with interstellar fantasies and earthbound charms a plenty. Charming, carefree and coy, it was one of the most compelling choices among compact cars in 1963.

Not only could you let the sunshine in like you never could before, you could spice things up and speed under the influence of V8 power more appropriate for such a interstellar name. Having come to life in 221 cube for in the larger sister ship the Meteor the previous season, the Falcon roots of both the Comet and Meteor meant the thin-wall cast Small Block V8 would fit in Fords compact offerings.

One of the things either of the compacts weren’t known for was sprightly performance. 0-60 times for Automatic equipped Comets with the 170 Cube/101 horsepower 6 straddled the 20 second barrier depending on model and options. With 63 more horsepower and oodles more torque, the upsized 260 V8 brightened the proceedings quite a bit in the still super lightweight Comet. As befitting its premium aspirations, it put it in closer shooting distance of V8 compacts (albeit of higher horsepower ratings) from Studebaker, Pontiac, Oldsmobile and Buick.

The new choices kept Comet sales afloat, if not growing. The Comet Convertible, in Custom and S-22 trims turned healthy business for drop tops, and proved to be Mercury’s favored soft top option in 1963. Just over 13,000 of these fun in the sun beauties found willing customers for the model year.

It would be the last year for the explicitly befinned Comet body however, as the Comet nameplate would continue to march upmarket until it was replaced in the lower rungs on the Mercury Mantle by the Montego moniker in 1968, however returning to as a gussied up Maverick in the early 70’s. Always standing for something a little bit more glittery in the small Ford sky, the Comet was and is such a charming proposition and alternative to your typical small classic Ford.